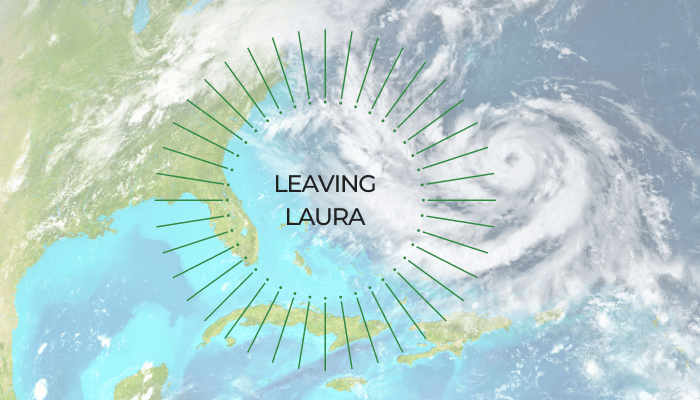 Back in the Saddle Again…Kinda

Well, I survived major hurricane #6 since 2005, Hurricane Laura. And, I have to admit, I’m completed knackered, as they would say in the UK.

If you haven’t been following my journey on Facebook, Eric and I made a last-minute decision to evacuate Wednesday, August 26. From Tuesday night to Wednesday night, Laura strengthened from a Category 3 storm to a strong Category 4, and predictions were that she would become a Category 5. A Category 5 hurricane, for those of you not in the know, is the most dangerous level a hurricane can reach, with winds in excess of 157 mph. Additionally, a 20-foot storm surge was predicted, which would not have been survivable.

Fortunately, I woke up early Wednesday morning and read this dreaded prediction. At that point we had nothing packed and nowhere to go. I woke Eric up with the grim news, and he agreed we needed to get the heck outta here. So, we rapidly threw some stuff into bags to last several days.

In the meantime, I was online, desperately trying to find a hotel for us to rent. Most within a 200-mile radius had no vacancies, as there had been a multiple-county mandatory evacuation order for about 600,000 people. The closest I could find was Waco, about 300 miles from here, so I secured us a few days there and thought we could figure out Part B of our plan after the storm made landfall.

We set off to Waco by about 10 AM Wednesday morning, arrived there around 7 PM, and checked into our hotel. As you might imagine, neither of us got any sleep that night, as we were glued to the Weather Channel and Facebook to see the progress of the storm. During our travel time, Laura shifted slightly east, which was good news for us, but deadly for our neighbors in Lake Charles, LA, about 45 minutes east of Orange.

Early Thursday morning, August 27, Laura made landfall in Cameron, LA, about 25 miles from my house, as a strong Category 4 hurricane with 150 mph winds. Fortunately, the storm surge was limited to only 10 feet rather than 20. Reports started coming in that while Orange was seriously affected, it was Lake Charles that was completely decimated by the storm. We knew our power would be out for a few days, and it turned out to be longer than that, as Laura almost completely destroyed the power grid in the area. Not only were the electrical poles and wires taken down, but she also destroyed major transformer and relay stations that conduct power to this part of Texas.

Fortunately, SE Texas has learned much from the massive punches we received during Hurricanes Rita, Ike, and Harvey, and so governmental agencies and utilities were MUCH better prepared and mobilized than prior hurricanes. Our power company, Entergy, had called in 20,000 linemen from 20+ states to help with the recovery efforts. The county in which I live, Orange County, had built a Category 5-resistant emergency management shelter to feed and house 300+ emergency management personnel in a situation just like this, and it worked like a charm. I don’t think our government and community could have been any better prepared.

A friend who had evacuated to the Houston area returned to Orange on Saturday to check on his home and he checked on ours as well. Aside from lots of limbs and debris in our yard, our home wasn’t damaged in the storm. Photos started coming in via Facebook from people who had stayed and/or members of the media. I saw lots of trees were down and some were on homes. There are a number of volunteer groups that mobilize and head out to areas affected by hurricanes, two of which are the Cajun Navy and East Texas Baptist Men. Those groups and others began bringing in supplies, food, and ice for those who were starting to return home.

What most people don’t realize unless you’ve been in a situation like this is that you have to return home completely self-sufficient. There are no grocery stores, hardware stores, restaurants, etc. open because they have been damaged and/or lack power. You need to bring your own food, ice, gas, cleaning supplies, and such because you cannot purchase them. Eventually, though, you’ll run out of what you brought with you and that’s when the supplies and food and meals provided by charitable organizations become key to survival.

On Sunday, August 30, we learned that our power was slated to be restored by 6 PM on Friday, Sept. 6. We had originally booked the hotel room through Sunday night, and I had extended it through Tuesday after we heard how much of the electrical grid had been destroyed. Now we had to extend it through Saturday, Sept. 7. Entergy has an excellent online map where you plug in your address to see outages. When I looked at Orange, the entire city was red – no power.

Based on the knowledge that we were now staying an extra week, we had to go buy some provisions that we could store in the mini-fridge in the room and heat in the microwave. Unbeknownst to me when I booked the room, our room had a micro-fridge and microwave and the hotel had laundry facilities. I had attempted to book at a hotel with a kitchenette, but those were all sold out, so we were quite fortunate to get this setup instead. While getting to-go meals delivered by Favor was fun the first few nights, the expense of that adds up fast. And unfortunately, neither FEMA nor our home owner’s insurance will reimburse us for the evacuation expenses.

We waited on pins and needles throughout the week, fervently hoping that the restoration of our power would be sooner than Friday. Alas, it wasn’t to be. Friday rolled around and I start getting texts from Entergy saying that our power restoration ETA was now unknown. Kicked in the gut again! Around 10 PM that same night, however, I got a text that it was restored, and we had a friend who went to check on it. As soon as he arrived at our home, the power shut off again. Based on what I’d read from Facebook posts from other Orange residents, power was cycling off and on for several hours after it was “restored.” We stayed up until about 1 AM after the power came back on around midnight (as seen on the outage map). Our thought was that if it was still on when we awoke Saturday morning, we’d return home. And, yes, when we awoke Saturday at 8 AM, the power was on, and our friend confirmed it, so we packed our belongings and got the heck outta Waco.

We arrived back in Orange on Saturday afternoon. However, it wasn’t until we turned onto our street that we began to see hurricane damages. Blue tarps covered almost every roof, and chunks of debris and trees lined the street. As promised, other than limbs and debris and leaves, our house looked pretty much as we’d left it. This current week has been spent unpacking, contacting someone to clean gutters and clean up the debris, and restocking our perishables. We had to throw out about $700 worth of food in the fridge and our upright freezer, so we didn’t even have condiments left in the fridge.

Both Eric and I are worn out. We were both in our 40s during our last evacuation in 2008, and we’re now in our 50s. What a difference twelve years makes! Ike was our last “full” hurricane evacuation in 2008, when we traveled to Little Rock, AR, only to have Ike follow us there and blow out the power at the hotel. This time, I made sure to stay clear of any potential hurricane path as I looked for a place for us to stay.

The good news about Hurricane Laura is that she is the one that “broke” Eric. Since Hurricane Harvey in 2017, I have been trying to convince Eric to install a whole-house generator that runs on natural gas. Between the regular power outages we suffer 2-3 times per month and adding on the almost yearly hurricane issues, I thought it would be a worthwhile, though costly, investment. He’s finally relented and agreed that this hurricane thing isn’t going to go away. We’re on schedule for February 2021. As you can imagine, we’re not the only ones wanting to do this, so all the local companies are booked 6+ months out. Granted, this generator won’t protect us if our home is destroyed or flooded, but it should help ease the suffering post-hurricane before power is restored.

Despite this experience, we’re still in the middle of hurricane season currently. Another one just as deadly could hit us in September or October. I’ll breathe a great sigh of relief when November 1 rolls around on the calendar. We’ll be hurricane-free until 2021 at that point.

Why Donna Has Been MIA