My sister lives in Houston and was dealt a big blow with Hurricane Ike, as well.  She recently purchased a new home and at the time of purchase, discovered that the seal around the kitchen window was broken, but never got around to doing anything about it.

Ike hit Houston, she lost power, and then the sheets of rain came down.  She realized that rain was pouring into her home through the broken seal in the kitchen window.  She and my niece were frantically brainstorming ways to stop the leak.  Should they stuff the leak with rice? How about oatmeal?  Then she remembered she'd purchased a big box of tampons at Sam's Club recently.  She and my niece proceeded to stuff tampons and sanitary napkins around the seal.  What a brilliant idea! 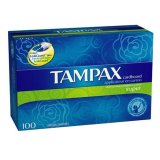 This turned out to be a great solution, as both are quite absorbent…LOL  So, when the sanitary products had absorbed as much water as they could hold, they ripped them out and replaced them with new ones, and continued to do this until the rain stopped.

Let's hear it for the power of tampons!

The Return Home After Ike

Previous Post Surviving Ike Next Post How Many Trees Could a Hurricane Fell if a Hurricane Could Fell Trees?